I first met Curtis Jobling two years ago. He visited the newspaper where I work. We'd invited him - the world renowned designer of Bob the Builder - to help publicise Local Newspaper Week.

I chatted to him for a couple of hours, grilling him about his work, purely for selfish reasons

So, as we live in the same town he was the obvious choice for the inaugural Bookengine interview.

When I told him about the blog he emailed me: "That sounds terrific, good on you, sir. The more folk enthusing about children's literature the better in my opinion."

We arranged to meet at Starbucks in town - "that most Bohemian of cafes" (Curtis's words).

When we shook hands at the allotted time, he'd just finished writing a thousand words on his laptop at the coffee house.

"I'm about 25,000 words into the second book for Puffin," he told me as we queued for our caffeine.

He's rather excited - and rightly so. His first novel, Wereworld, is being published next January and he's currently working on the second in the series after signing a two-book deal with the legendary children's imprint, renowned for such classics as Stig of the Dump and Watership Down. He has until Christmas to deliver his manuscript.

He feels particularly proud of the novel, he said. It proves he's a 'proper' novelist.

Of course the name Curtis Jobling is known all over the world as the designer of phenomenally successful children's TV programme Bob the Builder and creator of television programmes and picture books such as Frankenstein's Cat.

But this counted for nothing, he said, when it came to pitching his first full-length work of fiction to publishers.

He went on to show them that, yes, he could. To those who know Curtis Jobling, there could hardly have been any doubt.

He is a man of great talent and creativity, bubbling over with passion and enthusiasm for his work.

I remember watching him at the Warrington Guardian offices (see the photographs in this blog entry) as the pencil in his hand swiftly conjured up Frankenstein's Cat in sparse, exquisitely drafted lines and circles. In a minimum of ink and effort he also dashed off a picture of Bob the Builder for my daughter.

During our chat at Starbucks he proved himself to be a talented comedian and mimic, regaling me with asides about Nick Park (with whom he worked as an animator on the Wallace and Gromit short A Close Shave), the late Frank Sidebottom (aka Chris Sievey, who was an animation colleague for a time) and Caroline Aherne.

And so it was with great enthusiasm and - pun not intended - animation that he told me about Wereworld.

It is the story of a 15-year-old shepherd's son, Drew, who discovers he's the last of a long line of werewolves and the rightful ruler of the land of Lyssia, where Werelords reign. The press material promises 'an epic journey of fantasy and horror, from one deadly encounter to the next, meeting exotic Werelords at every turn as he’s drawn inexorably towards his destiny'.

The second Wereworld novel comes out in 2012. It's as yet unnamed, although it does have a working title, which Curtis forbids me from revealing (I scratch heavy lines through it in my notebook) not wanting to become a hostage to fortune. It was this book he was working on before our interview.

As we sipped our coffees, Curtis pulled from his laptop bag the dummy cover for Wereworld. It looked fantastic, with that metallic sheen redolent of many young adult fantasy books. But he was keen to point out that it was not aimed at that market. Indeed his agent, John Jarrold, does not represent children's or YA fiction.

However, given the insatiable bloodlust for vampires and werewolves currently, it's hard not to imagine Wereworld picking up interest from that market.

He's thrilled the books are to be published by Puffin. During the party to celebrate Puffin's 70th birthday, Curtis bumped into stablemate Charlie Higson, author of the tremendously successful Young James Bond series and erstwhile Fast Show writer and actor.

"We got talking when I said I'd worked with Nick Park (on A Close Shave) and one of my favourite Fast Show sketches was the spoof Charlie did of Nick," said Curtis, revealing that the two authors are now following each other on Twitter.

Puffin wasn't the first publisher to show interest in Wereworld, though.

"Bloomsbury (publishers of Harry Potter) were very interested in Wereworld at the start, but they wanted lots of rewrites. They liked Act One, but they said Act Two and Three they'd seen before. So I ended up rewriting 70,000 words.

"It was hard. And then they didn't take it. But Puffin did. And I think it's a stronger book because of that."

Unusually, given his background as an illustrator, Curtis is not responsible for the front cover artwork.

"I didn't want it to be like Dennis Waterman (a reference to a Little Britain sketch) - you know, write the theme tune, sing the theme tune, although I have done some black and white illustrations in the book," he said.

Wereworld marks a real departure for Curtis, who until now has been associated with TV animation and children's picture books. Although there has been some interest in turning the books into a film, so far he has not sold the rights.

He's enjoyed the level of artistic control he's retained writing the novels, compared to TV and film which are collaborative media. 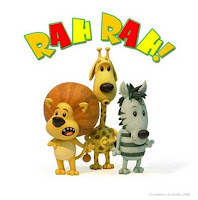 Raa Raa in particular caught my attention. Curtis passed me his business card which has his illustration for the show emblazoned on it. "It's about a little lion with a big mane and a big attitude," explained Curtis.

My three-year-old son is the target audience for this show, so I'm sure we'll be tuning in when it airs next year.

Chapman Entertainment is the company formed by Keith Chapman, the creator of Bob the Builder. The world-famous TV character celebrated his tenth birthday last year and Curtis was involved in much of the media celebrations with Chapman, including an interview on BBC Breakfast Time.

How does he feel about his most famous programme?

"Well, I have nothing to do with Bob now, but he's been good to me," he said.

Interview over, I told Curtis that I'm planning to do an in-depth piece about the late Robert Westall, who lived near Warrington.

"I used to have the same agent as him. Laura Cecil. She used to come to Warrington once a year, to drop off royalty cheques," he laughed.

And with that, we shake hands, and I leave to return to the day job. Curtis goes back to his seat in Starbucks, his laptop and his fantasy world of werewolves.

What a way to make a living!

http://www.curtisjobling.com/
Posted by Jeremy Craddock at 17:50